Resurrection Parish began as a vision of Ruby Campbell, who donated 5 acres of land to build a Catholic Church on Lexington Avenue.  After several years and much correspondence, Bishop John A. Donovan authorized the building of a “Mission Church of St. Peter’s” in 1968.  Father Robert Weithman accepted the assignment as Pastor to the Mission Church in 1969.  He led the members of the Mission Church in worship for the first time on July 6, 1969.  Sunday worship was held in the auditorium of Lexington Junior High and daily weekday Masses were held in private homes. The laity numbered approximately 1500.

The boundaries of the Parish were established including the southern townships of Richland County including Troy, Perry, Jefferson, Worthington, and most of Monroe and Washington Townships.  The official name for the Parish was chosen by asking parishioners to suggest ideas.  Thirty names were proposed, narrowed down to four, and the final choice of Resurrection Parish was chosen by popular vote of the congregation. The name became official on November 19, 1969.

Shuler and Bricker were chosen as the architects and Ralph Balaun was the designated designer.  The plan was for the church to seat 600 facing the altar from three sides. Father Weithman said the parish center was designed for flexibility with awareness of Vatican II teachings on the liturgy.  Bids for the construction of the building were solicited and Midwest Construction of Lexington was approved.  Groundbreaking took place on June 29, 1970.  The cornerstone of the building was laid on November 1, 1970.  Much of the material and labor to build the church was donated.

The first Mass was celebrated on December 24, 1970 in a church that was not yet completed.  The roof had just been finished, but lights, heat and borrowed chairs were gathered to provide for the 600 people that attended that Christmas Eve.  Regular Masses were still held at Lexington Junior  High until the church was completed.  April 4, 1971 officially marked the beginning of the Mission Church and the sanctuary was dedicated by Bishop John A. Donovan on June 6, 1971.

Many parishioners gave time and talent to complete the work of the building.  Bill Mertler and Fraan Raitch built the altar and sanctuary furniture.  The figure of the Risen Christ was carved by Paul Shuler and was a gift from the architects.

Carol Rahall was influential in deciding the medium for the Stations of the Cross.  Deanna and Ralph Balaun designed the stations which were created by members of the parish by hooking wool onto burlap.  The women who hooked the stations spent 150 to 400 hours on each one and the wooden crosses in the corner of each were fashioned from walnut by Joe Behr who became our first Deacon.  The full project took three years to complete from design to assembly. 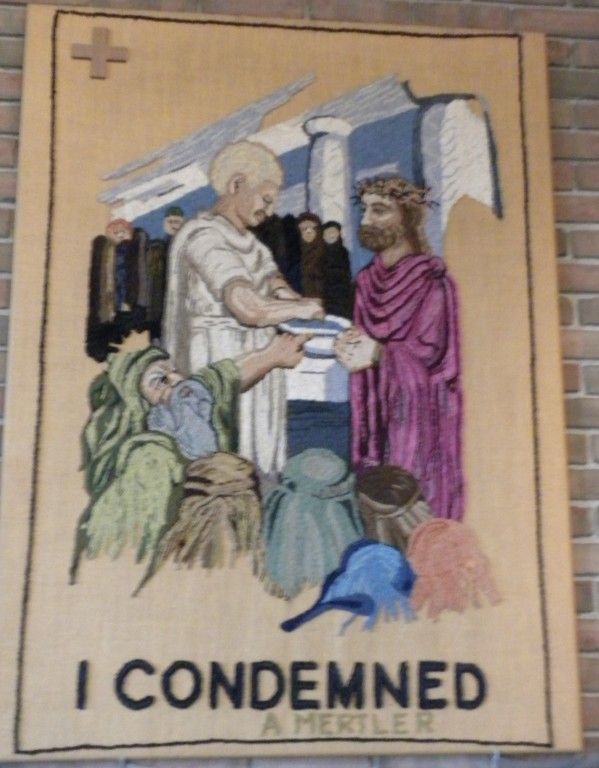 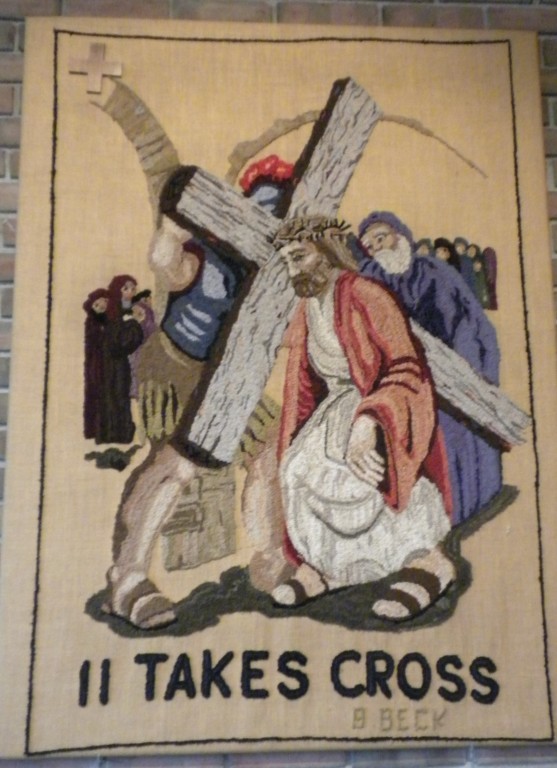 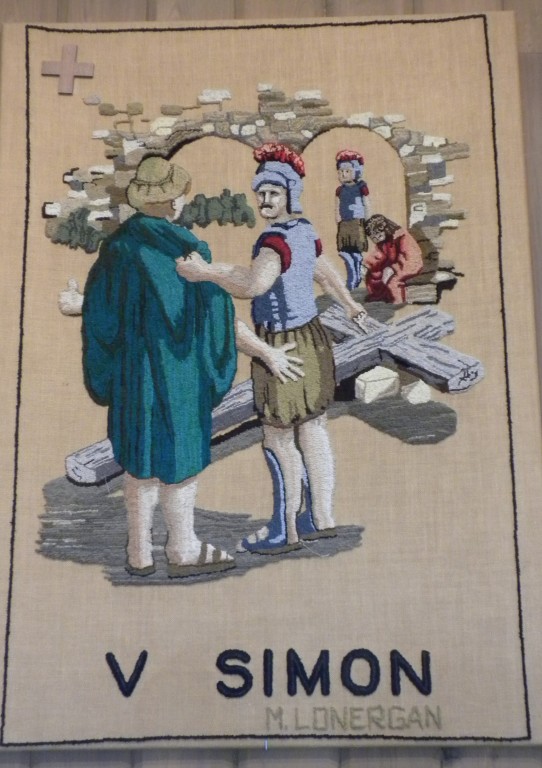 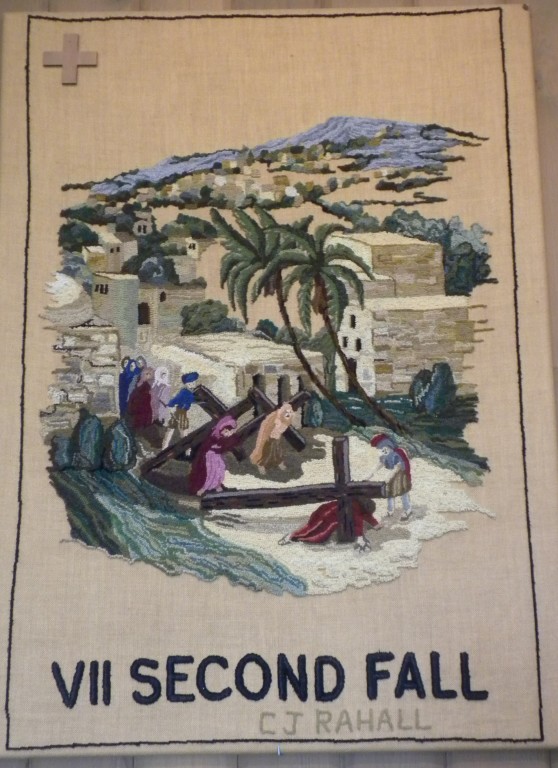 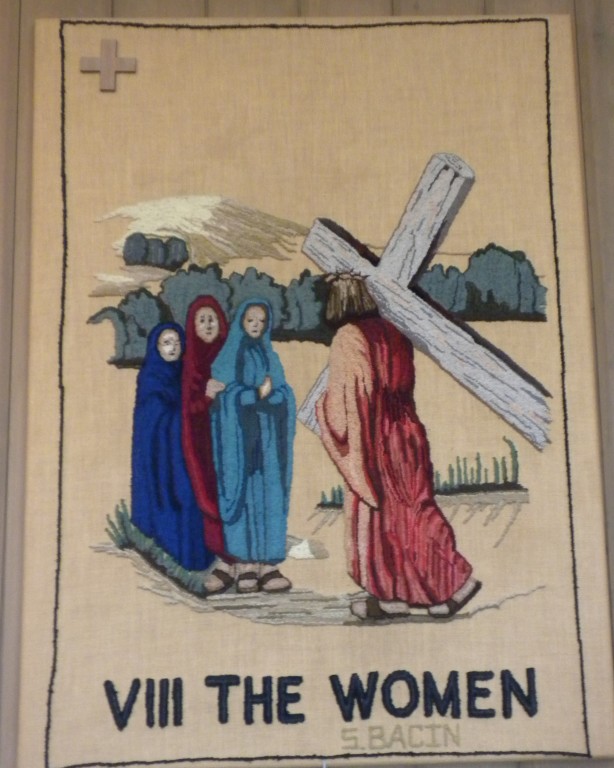 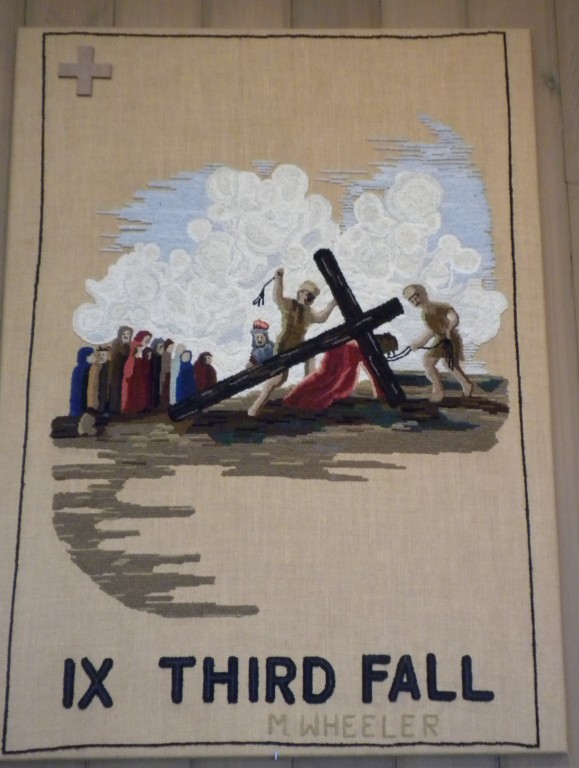 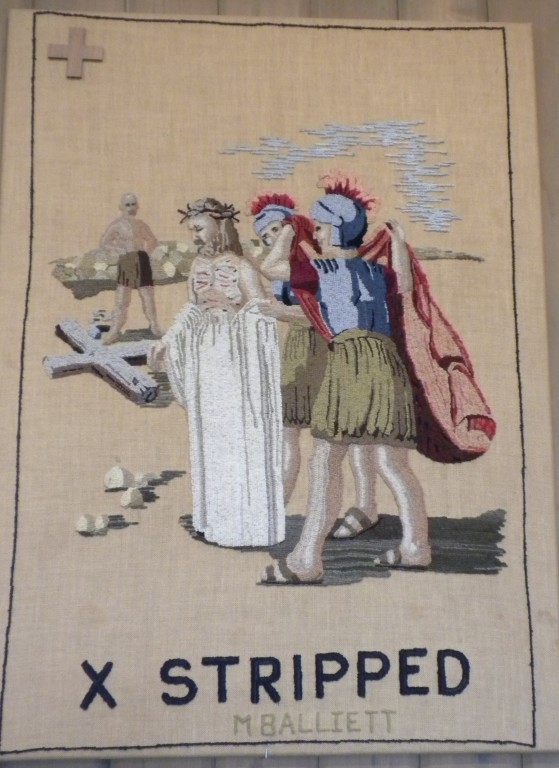 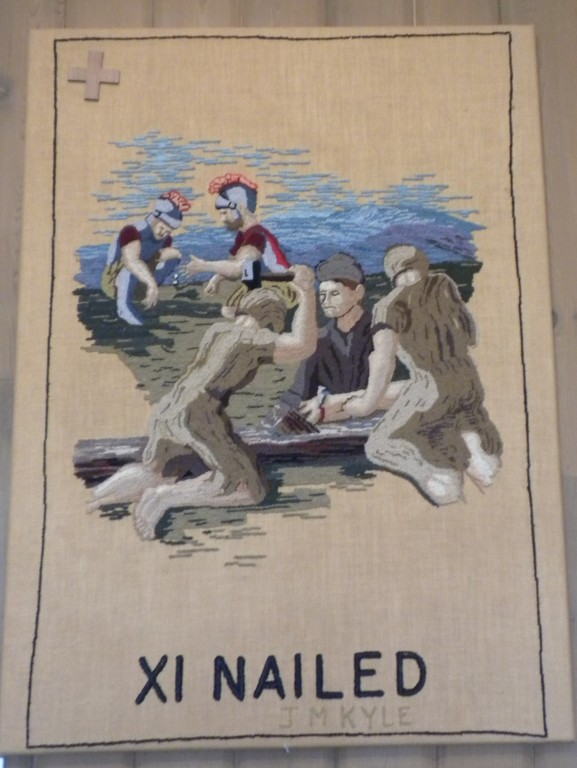 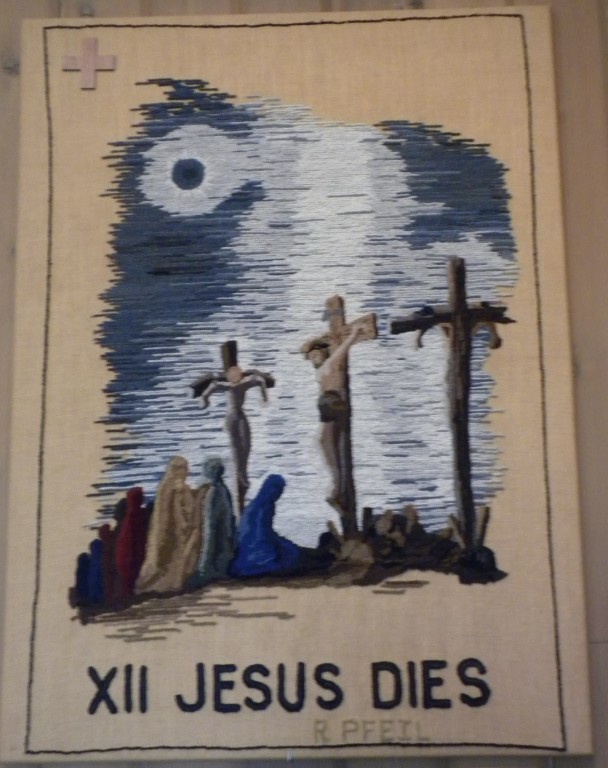 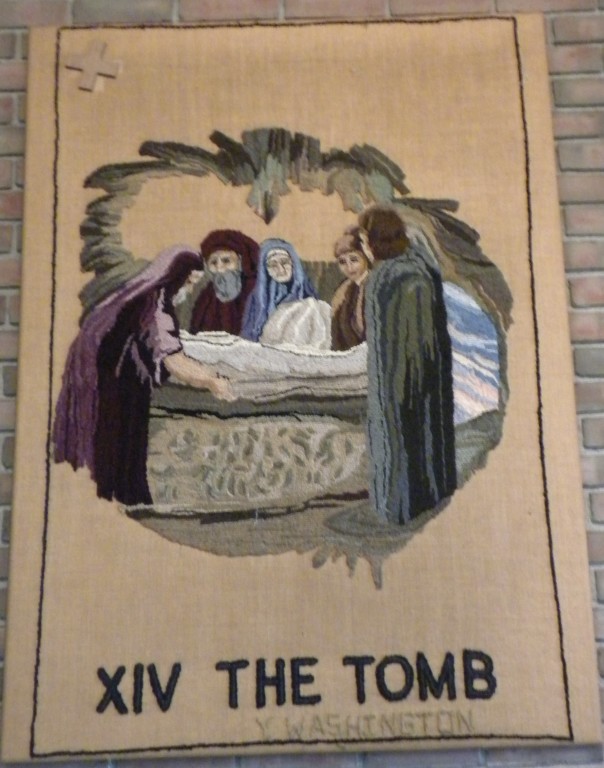 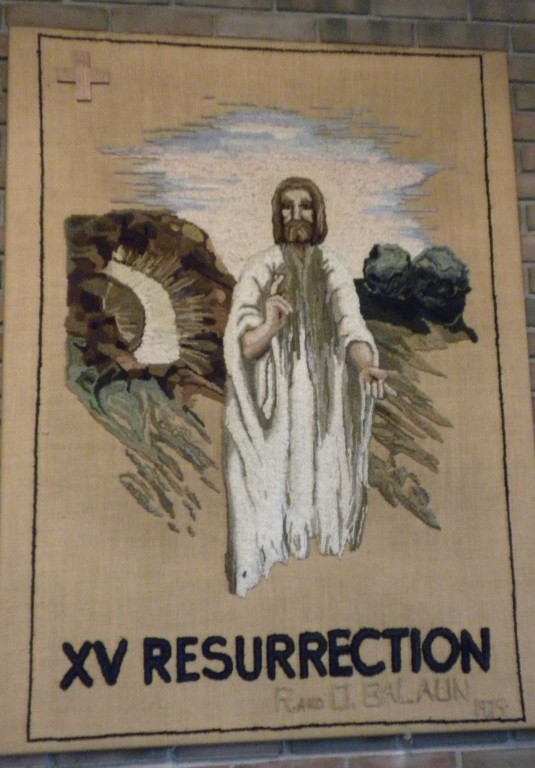 By Ralph and Deanna Balaun

The Last Supper hangs in the Blessed Sacrament Chapel. 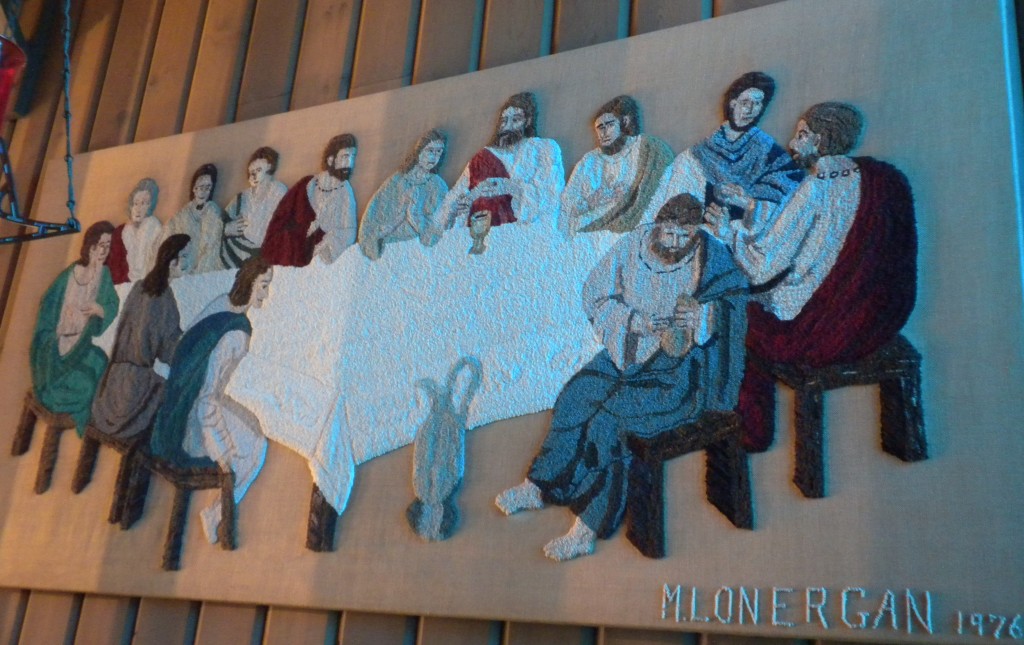 All of these beautiful works of folk art were created lovingly by members of the parish to complement the design of Resurrection Parish Church.

Resurrection Parish was a very active parish with a growing congregation.  In 1975 it was determined another building was needed as an Administration Building with offices and living quarters for the priest.  What is now the Rectory was completed in 1976.

Resurrection has been blessed to be served by the following Pastors and Deacons:

Father Robert Weithman was our first Pastor and guided the new church through the initial building stage to becoming a well-established parish.  He served 1969-1981.

Deacon Joe Behr was our first Deacon and he was ordained in 1979 and served until his death in 1983.

Father Lawrence Scharf became the Pastor in 1981.  Under Father Scharf’s leadership the parish grew and formed many programs and ministries.  In February of 1988 a new hall was added onto the church for fellowship with classrooms below.  Father Scharf served until 1993.

Deacon James Hostutler was ordained in 1986 and served the parish for many years until he moved to another area.

Father Stanley Szybka became the Pastor in 1993 and served until 2005. The parish continued many of the ministries and programs under his leadership.

Deacon Tom Dubois was ordained in 2000 and continues to serve the parish and the community.

Father Nelson Beaver became the Pastor in 2005.  He served as a gentle and caring leader continuing the work of the previous pastors.  In June of 2018 a Community Prayer Garden with Outdoor Stations of the Cross was dedicated by Bishop Daniel Thomas after several years of planning and with generous donations from the parishioners. 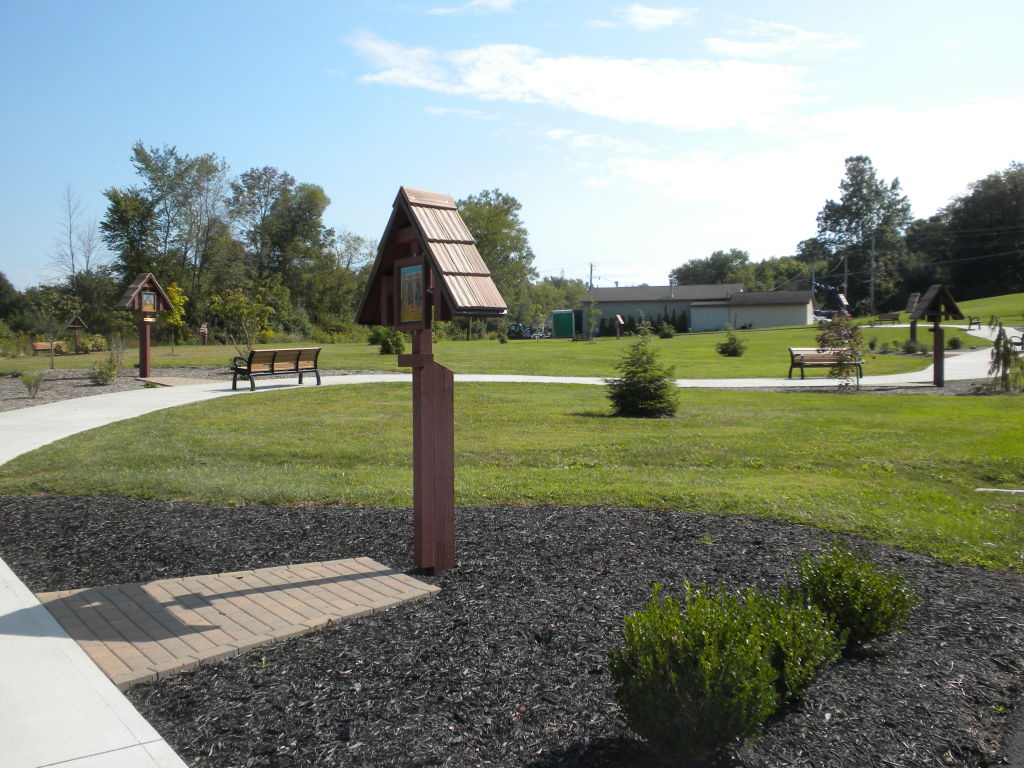 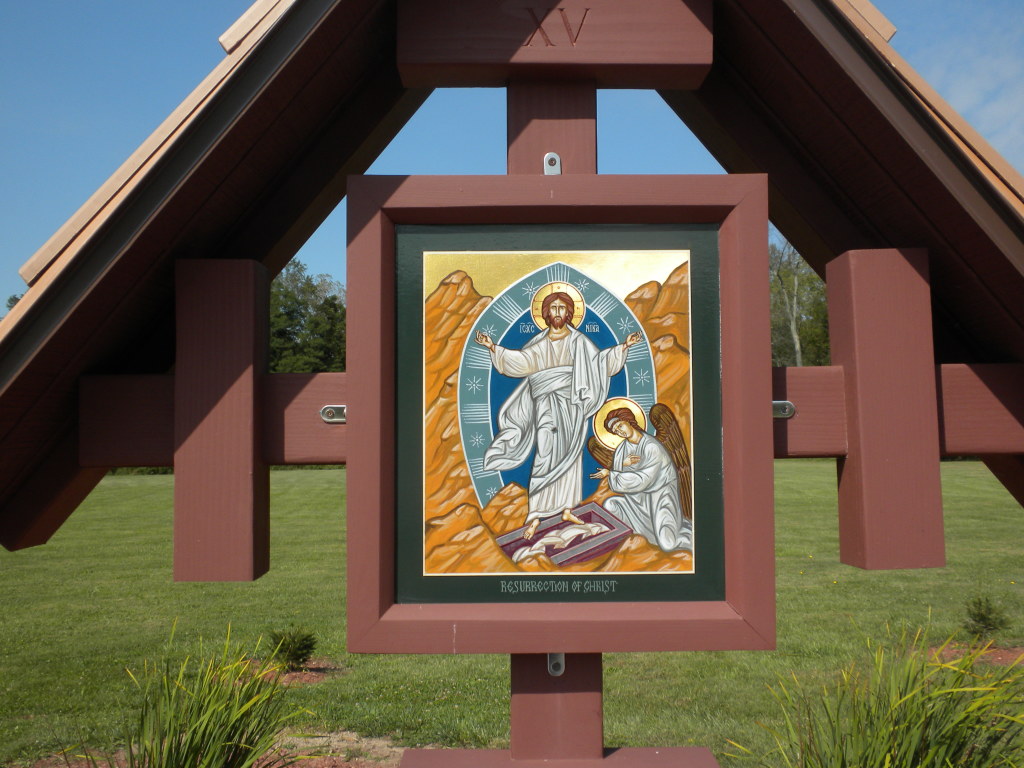 The plants in the Prayer Garden have a special meaning for each station.  A booklet is available explaining the plantings and their meanings at the beginning of the Stations.

Father Nelson Beaver was the Pastor until 2019.

Deacon Fred Stockmaster was ordained in 2013 and was assigned to Shelby and Plymouth after ordination.

Father Matthew Frisbee came to Resurrection Parish in June of 2019.  We welcome him to lead us into the future.

Much of the history here came from the 25th Anniversary book, written by Levi Zeigler and edited by Judy Massa.